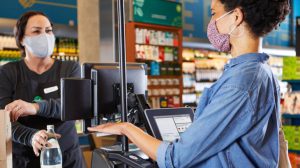 Recent reports have revealed that Amazon’s ‘One’ palm scanner payment technology will be launching at over 60 Whole Food stores in the state of California. Stores in Los Angeles, Santa, Cruz, Malibu, Santa Monica, Orange County, Montana Avenue, the San Francisco Bay Area and Sacramento will be receiving the tech with the objective of modernizing retail shopping.

Amazon One constitutes part of the mission of the company to use ‘contactless’ technology which speeds up payment. The users visit the kiosk/point-of-sale station at locations with the tech to link their palm and payment card to the service. Next, they just have to hover their hand over the scanner for the transaction to be completed.

Amazon One works by creating unique palm signatures using machine learning to identify its customers. The kiosk takes a picture of the user’s palm, but the company has claimed that the image isn’t stored there, but is instead encrypted and sent to a server for matching.

There are however, concerns about how it affects users’ privacy. Some users are not happy with the idea that Amazon One could be used to track your movements and location.

In 2021, Amazon collaborated with AXS, a ticketing company, with plans to use Amazon One at the Red Rocks Amphitheatre. After the announcement was made, numerous artistes, music fans and human rights group protested that the technology be dropped, and biometric surveillance tools be banned. They signed a joint letter stating concerns about Amazon sharing biometric data with the government and hackers stealing the data from the cloud.

Amazon has been known to store Alexa voice data, so they are not wrong to be so concerned. Amazon has previously sold biometric facial recognition services to the U.S. law enforcement.