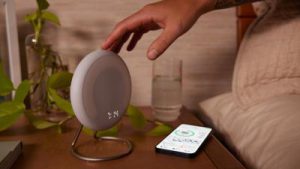 Amazon, the tech and e-commerce giant announced on Wednesday that it would start selling a device that can track sleeping patterns without a wristband later this year.

Called ‘Halo Rise’, the device will make use of artificial intelligence and no-contact sensors to measure the breathing patterns and movement of the user, allowing the tracking of sleep stages at night. Amazon stated that the device ‘does not include cameras or microphones,’ and will sell for $139.99.

Halo Rise would be the latest device in Amazon’s Halo line, which includes a fitness tracker that can track sleeping patterns and physical activity. Amazon said that device can connect with Alexa, its virtual assistant, and allow users to wake up to their favorite songs, as well as a light that ‘simulates the colors and gradual brightening of a sunrise.’

The new device demonstrates the company’s desire and moves to integrate technology into its consumers’ lives, and broaden its reach into wellness. Amazon recently planned a $3.9 billion takeover of the primary care organization One Medical, a deal currently under review by the Federal Trade Commission.

Amazon has faced a great deal of scrutiny over its dealings with consumer data, so they assured consumers on Wednesday that information in the Halo Rise device will kept safe, saying ‘the health data is encrypted in transit and at rest in the cloud.’

‘Amazon Halo health data is not used for marketing, product recommendations, or advertising, and never sold,’ the company stated.

Amazon separately announced the future release of a new Kindle Scribe, where consumers can write on. It will have new features such as home robot Astro, Ring doorbell cameras, and new Echo devices.