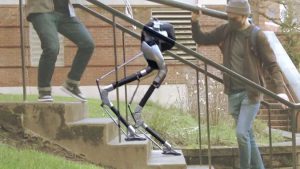 It is customary for four-legged robots with computer vision to have the ability to navigate stairs, but it is not normal for a ‘blind’ bipedal robot to do it. Researchers from Oregon State University has successfully completed this task with a bipedal robot referred to as ‘Cassie’ from Agility Robots by training her in a simulator.

The researchers pointed out that robots cannot totally depend on cameras and other sensors as a result of dim lighting and other issues. Ideally, their preferred method would be ‘proprioception’ (body awareness) to navigate unknown terrains.

They made use of a technique called sim-to-real Reinforcement Learning (RL) to outline how the robot will walk. They noted that ‘for biped locomotion, the training will involve many falls and crashes especially early in the training,’ but a simulator allows them do this without breaking the robot. They trained the robot to navigate a number of scenarios, including stairs and flat ground.

With the simulated training over, the researchers took the robot on a test run around the university campus. It proved to be efficient, handling curbs, logs and other unfamiliar terrain. On the stairs, the researchers had it do 10 trials ascending and 10 trials descending. It handled those with 80% and 100% accuracy, respectively.

In the first trials, there were a few caveats as the robot had to run at a standard speed. It is also very reliant on memory mechanism as a result of the challenge of navigating an unfamiliar environment while blind.

The researchers make plans for future tests to observe if the efficiency will improve with the addition of computer vision. They wrote ‘this work has demonstrated surprising capabilities for blind locomotion and leaves open the question of where the limits lie.’