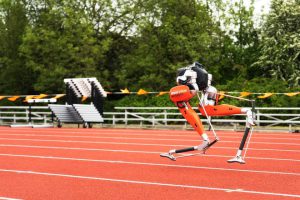 A bipedal robot referred to as ‘Cassie’ has just earned the official Guinness World Record of the fastest 100 meters ran by a bipedal robot. Cassie was created under the direction of Robotics Professor Jonathan Hurst at Agility Robotics, a company owned by Oregon State University.

Although nowhere near the human record of Usain Bolt at 9.58 seconds, Cassie’s time of 24.73 seconds is a marvel considering that it is the first robot to make use of machine learning to control a running position on outdoor terrain. The race was run on the Whyte Track and Field Center at Oregon State.

The race was started by Cassie in a standing position, before going into a sprint formation, where the robot bends its knees like an ostrich. Cassie operates blind, with no cameras or external sensors.

Earlier, Cassie had completed a 5K marathon on Oregon State’s campus with a time of 53 minutes on a single battery charge.

‘We have been building the understanding to achieve this world record over the past several years, running a 5K and also going up and down stairs,’ said Devin Crowley, a graduate student who spearheaded the Guinness feat. ‘Machine learning approaches have long been used for pattern recognition, but generating control behaviors for robots is new and different.’

‘Cassie has been a platform for pioneering research in robot learning for locomotion. Completing a 5K was about reliability and endurance, which left open the question of, how fast can Cassie run? That led the research team to shift its focus to speed.’

Cassie made history by becoming the first robot to sprint, but it isn’t the first bipedal droid. The Boston Dynamics and Mabel team designed a humanoid robot known as the world’s fastest knee-equipped bipedal bot.

‘This may be the first bipedal robot to learn to run, but it won’t be the last,’ Hurst said. ‘I believe control approaches like this are going to be a huge part of the future or robotics. The exciting part of this race is the potential. Using learned policies for robot control is a very new field, and this 100-meter dash is showing better performance than other control methods. I think progress is going to accelerate from here.’