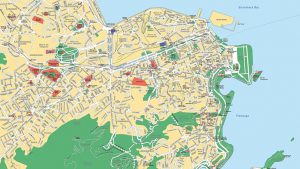 A study of theirs used coronavirus data collected by John Hopkins University to illustrate how and where infections could spread on a global scale. Another study made use of anonymous cellphone data to track the travels of residents of Rio de Janeiro in their city before, during and after its strictest lockdown protocols.

In their most recent research, Ramesh and Seetharam combined those two ideas into an algorithm which narrows the geographic scope of their COVID predictions, which makes it more helpful for appropriate officers trying to reduce the spread of the virus.

Paying attention to the second largest city in Brazil, they correlated cellphone data with coronavirus infection rates in Rio’s municipal districts to build a mathematical model which predicts the changing patterns of cases for the next week in different municipalities. They base their projections on current COVID rates coupled with mobility trends to and from the districts with the highest rates of infection.

‘This is one of the first studies that has quantified mobility in a manner that it can be used to demonstrate how cases are going to spread’, Seetharam said. ‘It’s not just the number of cases in a particular region that contributes to future cases in that region.’

Ramesh and Seetharam are of the opinion that their prediction model could be mapped onto larger jurisdictions like counties, states or countries, giving the authorities the ability to predict where COVID-19 could spread the fastest and take appropriate measures to curb it.

‘We wanted to build a model that can be translated easily into policy, one with subregions that are managed through independent jurisdictions’, Ramesh said. ‘That way, someone can actually impose a lockdown on that level, as well as collect data about cases and predict on that level.’

Long-term policies could be made using the Binghamton team’s prediction algorithm.

‘If you know there are a lot of cases in a particular region, you could think of a future world where this model could be used for some kind of city planning’, Seetharam said. ‘You could create traffic flows in such a way that people try to avoid that region because of the inconvenience involved. That would lessen the spread of infection. It need not be anything invasive, but minor tweaks could be beneficial.’