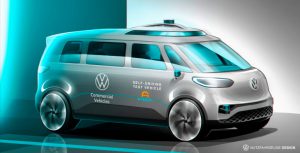 All-electric ID. BUZZ shall be the first vehicle in the Volkswagen Group to also drive autonomously.

Germany has adopted a legislation allowing driverless vehicles on public roads to take effect from 2022, giving companies the opportunity to deploy robotaxis and delivery services in the country on a large scale. Although autonomous testing is currently permitted in Germany, this legislation would allow operations of driverless vehicles without a human safety operator.

Just last week, the bill passed the Bundestag— Germany’s lower house of parliament. It specifically looks at vehicles with Level 4 autonomy. Level 4 autonomy is a designation by the Society of Automobile Engineers (SAE) which means the computer handles all the driving in certain environments or conditions. \

‘In the future, autonomous vehicles should be able to drive nationwide without a physically present driver in specified operating areas of public road traffic in regular operation’, the legislation reads. ‘According to the Federal Government, further steps must be taken to introduce corresponding systems into regular operation so that the potential of these technologies can be exploited and society can participate in them.’

The bill however still needs to go through the upper chamber of parliament (the Bundesrat). Also encompassed in the bill are potential initial applications for self-driving cars on German roads, like public passenger transport, business and supply trips, logistics, company shuttles etc.

Companies seeking to benefit from this legislation and operate commercial driverless vehicles will have to adhere to some other rules, some of which includes carrying liability insurance and having access to stop autonomous operations remotely.

Companies already testing in Germany may have the upper hand in the economy. For example, Argo AI has been testing its autonomous vehicles at the LabCampus Innovation Center at Munich Airport. In June last year, the company opened its European headquarters in the Bavarian city, and this summer, it will open its test site in collaboration with Volkswagen to test the VW ID.Buzz electric vans. Inter-subsidiary Mobileye also has a footprint testing AVs in Germany.

A lot of countries and U.S. states have various regulations regarding testing and potentially commercial deployment. Last week, Chinese robotaxi startup Pony.ai became the eighth company to be granted a permit to test driverless vehicles in Germany. Germany’s legislation is a step into the future of integration into regular traffic.

← Massive Demand for Cybersecurity Professionals in the U.S.
Computers vs Archaeologists: Who is better at sorting through the past? →