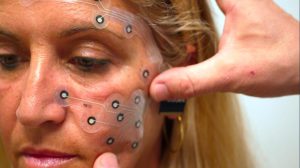 A global study carried out in 2020 reported that over a third of adults had sleeping problems, heightened by the COVID-19 pandemic.

According to the Cleveland Clinic, there are over 80 different types of sleep disorders such as sleep apnea, insomnia and restless leg syndrome.

Patients however need to undergo a clinical sleep study before the doctor can diagnose them. Usually, the technician tapes sensors to the patient’s body and head. These sensors connected to a computer, sends data to the technician who monitors the patient from a nearby lab.

Founded in 2020, Israeli startup X-trodes have developed a sleep tracker with tiny sensors which sticks to the skin like a band-aid and can be easily used at home.

Home sleep tests for sleep apnea typically only measure breathing patterns. X-trodes sensors however detect any electrical activity in the body that occurs while you sleep including brain waves, muscle activity and eye movement.

‘What we have developed at X-trodes are comfortable, soft, flexible, dry electrodes,’ says Ziv Peremen, co-founder and CEO of X-trodes, adding that the tracker is also wireless so ‘you can sleep in whatever position you like.’

The tracker sends data to a smart device which X-trodes software analyzes and makes a report of. Doctors can then use it to diagnose the patient’s sleep disorder.

X-trodes raised $4.5 million in funding in 2021 and is now looking to get approval for the technology from the US Food and Drug Administration, with hopes to start selling the tech to sleep clinics in 2023.

Peremen says the device can also make sleep testing cheaper. According to FAIR Health, a non-profit organization which publishes healthcare claim prices, a basic in-lap sleep study starts from $5,300 in the U.S. X-trodes technology would cost only a tenth of that amount.

Peremen also believes the home test would be more accurate than the one in the clinic. ‘You can take into consideration all the other factors— sometimes it’s your partner, sometimes it is room temperature, external noise and so on.’

More accurate data could help scientists understand sleep better, as well as the connection between it and chronic conditions, brain health and emotional wellbeing. Rebecca Robbins, Instructor in Medicine at Harvard Medical School states that this field of medicine is still fairly new.

‘We’re uncovering some of the longer-term implications of sleep,’ says Robbins.

According to Peremen, a version of this technology has already been sold to 40 research groups to study sleep patterns, with each kit costing $10,000.

The kit could also be used to study rapid eye movement (REM), a sleep behavior disorder where patients appear to act out their dreams. It is an early predictor of Parkinson’s or other neurodegenerative diseases but occurs unpredictably.

‘Once you have a solution like X-trodes that you could wear for several nights in a row, you dramatically increase the chance of catching this pattern,’ says Peremen.

Experts say that accuracy is hard to prove for many at-home sleep trackers in the market.

‘We currently don’t have a standard to evaluate and endorse the level of accuracy that we accept for a device,’ says Massimiliano de Zambotti, a neuroscientist at SRI International, a non-profit research institute which conducts validation studies of wearable sleep technologies.

According to market research company Pitchbook, the sleep technology market was worth $12 billion in 2020.

Robbins recommends that companies and scientists partner ‘to make sure that their algorithms are scoring sleep correctly and giving information back to their consumers that is accurate.’

Peremen says that X-trodes is currently validating the technology with researchers.

‘Sleep is a gold mine for understanding our health,’ says Peremen.

← Websites Are Collecting Your Data, Even Before You Click Submit
Researchers Can Predict Vaccine Hesitancy on Zip Code-level →