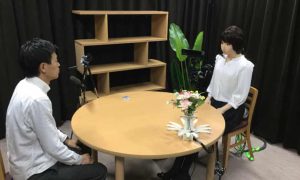 Scientists are creating an AI system that understands the concept of humor, and laughs in the right way and at the right time.

The laughing robot called Erica, could improve natural conversations between AI systems and people, according to the team behind the robot.

‘We think that one of the important functions of conversational AI is empathy,’ said Dr Koji Inoue of Kyoto University, lead author of the research. ‘So we decided that one way a robot can empathize with users is to share their laughter.’

The research was published in Frontiers in Robotics and AI. Inoue and his team set out to train the AI system on conversational laughter. They collected training data from over 80 speed-dating dialogues between male university students and the robot. Erica was initially teleoperated by four female amateur actresses.

The dialogue data contained solo laughs, laughter of mirth, and social laughs like embarrassed or polite laughter. This data was used to teach a machine learning system on when to laugh and the appropriate type of laughter.

Using the audio files, the algorithm learned the basic features of social laughs, which tend to be more mellow, and mirthful laughs, with the objective of using them in appropriate situations.

‘Our biggest challenge in this work was identifying the actual cases of shared laugher, which isn’t easy because as you know, most laughter is actually not shared at all,’ Inoue said. ‘We had to carefully categorize exactly which laughs we could use for our analysis and not just assume that any laugh can be responded to.’

Erica’s ‘sense of humor’ was tested by creating four short dialogues shared with a person, integrating the novel shared-laughter algorithm into existing software. These scenarios were compared to times where Erica emitted a social laugh every time she detected laughter, or didn’t laugh at all.

130 volunteers watched the clips and rated the shared-laughter algorithm most favorably for human likeness and understanding, naturalness and empathy.

The team stated that laughter could help create robots that have their own distinct character. ‘We think that they can show this through their conversational behaviours, such as laughing, eye gaze, gestures and speaking style,’ said Inoue. However, he stated that it could take over 20 years before it would be possible to have a ‘casual chat with a robot like we would with a friend.’

She added that ‘they’re not sentient, but they might get very good at making you believe they understand what’s going on.