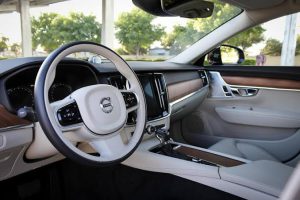 More and more driver-assist systems are installed in new automobiles, companies still bear the liability of ensuring that the technology is used by drivers in a safe and responsible manner. This usually comes in the form of a driver-monitoring system, through which there are various ways automakers may track this kind of data. A report from Consumer Reports released on Monday is ringing the bell on Tesla specifically.

Unlike other automakers which use a driver-monitoring system, Tesla includes in-cabin cameras which can record and transmit footage from inside the vehicle. Users have the choice to opt out of the program, but for those who choose not to, Tesla has a disturbingly large amount of information.

Consumer Reports’ biggest issue is how Tesla uses this technology. The publication argues that although the company alleges that the cameras allow it to review footage and stop owners from using features like the Full Self-Driving Beta, they do not warn the driver in the defining moment. Other automakers including General Motors include an escalating warning informing the driver that they’re not paying sufficient attention while using the driver-assist technology, Super Cruise.

In a Model 3 and Model Y particularly, the cabin camera can record videos of the preceding moments of an automatic emergency braking event, or that of a crash. It is possible that the car then shares this footage with Tesla. The system differs greatly from other automakers which use closed-loop system which do not transmit or save data. Other automakers like GM, Ford and Subaru make use of infrared cameras to track eye movement and head tilts, which informs the system if the driver is paying attention to the road or not.

CR claims that although access to the Tesla footage may be protected and restricted, it is not impossible that someone may get their hands on it— including someone with bad intentions. The footage could also be used to observe drivers for other business purposes. It could be used to track routines to create loads of data on the driver. Tesla has said in the past that footage isn’t tied to the specific VIN of a car, but if we are going by what CR says, faces are visible in the footage. Also, passengers in the car may not consent to being recorded, even if the driver has.

The publication said that problems such as these need addressing in the near future as more technology is introduced into cars by automakers. For now, this is a mere red flag.