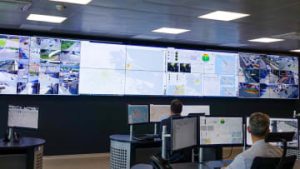 In the past few years, in the canal city of Venice also known as La Serenissima, or The Most Serene, things have become less serene, as a result of the 30 million visitors who visit the city of just 50,000 inhabitants.

Before the dreaded coronavirus struck, tourists were arriving from all the world in large numbers, filling up the main streets and waterbuses. The authorities attempted various measures by introducing separate lines for residents at major waterbus stops and also bringing in turnstiles to filter locals from tourists on busy days. There was plans for an ‘entrance tax’ in 2020, but it has been postponed to January 2022 as a result of the pandemic.

Not only controlling footfall, the authorities wanted to keep track of tourism itself by counting exactly who is present in the city and the locations they go to.

On the island of Tronchetto, next to the two-mile bridge separating Venice from the Italian mainland, the Control Room opened in September 2020. A warehouse abandoned since the 60s is part of the new headquarters for the city’s police and government― a control tower of some sort.

The building has offices for the mayor and other dignitaries and a big CCTV room with cameras bringing in images from around the city, presided over by the police.

Across the corridor, there’s a Smart Control Room― a large array of screens with information and images coming from around the lagoon. They are not being monitored for crime, but for information to the authorities to create profile for the large amounts of people visiting Venice. The aim is that gathering this information will help track footfall, enable the authorities activate turnstiles and initiate the charging of entrance fee on busy days. Eventually, the data should help create a more sustainable tourism plan for the future.

‘This is the brain of the city’, says Marco Bettini, co-director general of Venis, the Venice-based multimedia and tech company which built the system.

‘We know in real-time how many people are in each part (of the city), and which countries they’re from’.

Clicking on the video feed from the Grand Canal, or as he calls it ‘the freeway of Venice’, he says, ‘There’s huge traffic pressure here’. Public waterbuses, boats delivering goods, taxis, residents zipping up the road in their private boats and the famous ‘gandolas’ are all hustling for their space on the Grand Canal. Because it has no designated lanes, it is a free for all.

The novel system not only records what occurs, it examines the traffic and recognizes the various types of boats. Then, it stores the numbers. It also tallies with the timetables of public transportation, recording if a waterbus is late and by how many minutes.

The workers can also activate a ‘time machine’ to look back on the activities under the main bridge at Piazzale Roma, the main entry point to the city.

However, what is more interesting to the authorities is the number of pedestrians, taking a look at the tourism patterns. The system counts visitors in the environment of cameras posted around the city and who they are and where they come from in conjunction with TIM (Telecom Italia, Italy’s largest telecommunications provider).

On a particular winter day, before the Veneto region entered into a semi-lockdown, over 13,628 people entered Venice and 8,548 left. By 8am, 1,688 people arrived at Piazzale Roma.

At 10am, the arrivals had gotten to 2,411, most probably the daytrippers.

The authorities can determine the origin of the arrivals by examining their phone data (it is important to note that the information is aggregated automatically, so no personal details can be stolen).

According to Bettini, there are 97 people in the area around St Mark’s square on this Saturday afternoon, and only 24 of them are not Italian.

‘As you can see, the number of daytrippers is steep’, Bettini says. This is important information because these ‘hit-and-run’ tourists are usually charged with causing the most harm to the city. They come in from other parts of Italy and hardly spend money, bringing their own food and having illicit picnics on the bridges and waterfronts. Because of the fact that they don’t stay overnight, they couldn’t be counted by the authorities until now.

Keeping track of the amount of daytrippers and their usual routes could be vital for a city who is closing its main thoroughfares to non-locals in order to spread people throughout the city.

Valeria Duflot, co-founder of Venezia Autentica, an online social enterprise working on sustainable tourism says, ‘The problem is not that Venice has too many visitors. The problem is that all the visitors go to the same two places: St Mark’s Square and the Rialto Bridge’.

Italians are logged by the region they live in. For the foreigners, the system breaks down where they come from (data is based on the place of their mobile registration, most likely the country of origin), and illustrates them like bars on a map on the city― a graphic representation of overcrowding in real time, with colors going from white to red as the numbers get higher.

Presently, 36% of foreign visitors are German, followed by the Swiss (16%) and British (13%), this visit occurred before the new UK variant forced the ban on British travelers). Only 1.312% of visitors are from the US.

Today, there have been over 85,000 people logged in Venice, with about 177,000 have been in Mestre, on the mainland. There have been 5,700 people on the islands, last Saturday afternoon.

There is a lot more the authorities are watching out for: the speed of people moving in St Mark’s Square (the machine highlights when people start running), the tide levels throughout the lagoon (vital for monitoring acqua alta flooding, and making a ruling on when the new Mose flood barriers should be raised).

The system was built in three years with a cost of €3m ($3.5m). Although there might be a few implications for privacy, the authorities are quite proud of their achievement.

‘In 2021, Venice celebrates its 1,600th anniversary’, says Bettini. ‘And we’ll be celebrating with technology’.