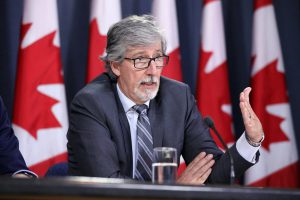 Clearview, the facial recognition app has been declared illegal in Canada. The country’s privacy commissioner said on Wednesday that the parent company should delete Canadians’ faces from its database.

‘What Clearview does is mass surveillance, and it is illegal’, said Commissioner Daniel Therrien at a news conference. He stated that the company was putting all of society ‘continually in a police lineup’. While the Canadian government does not have the legal authority to enforce photo removal, the position of the country was clear—‘This is completely unacceptable’.

Clearview got rid of over 3 billion pictures from social media networks and other public websites for the purpose of building a facial recognition app now used by over 2,400 U.S. law enforcement agencies, according to the company. When an officer runs a search, the app will provide links to websites where the person’s face has appeared. The company’s scope reach and law enforcement application was first reported by The New York Times in January 2020.

Mr. Therrien, with three regional privacy commissioners in Canada began investigating Clearview about a year ago, sometime after the article on the company was published. Canada’s privacy laws require people’s consent to use their personal data, which gives the government suitable grounds to inquire into the situation. Authorities in the United Kingdom and Australia are jointly inquiring into the situation as well.

Dozens of law enforcement agencies and organizations in Canada used the app, according to the commissioners, including the National Royal Canadian Mounted Police. One Canadian law enforcement spoke to the Times last year and said it was ‘the biggest breakthrough in the last decade’, for the investigation of child sexual abuse crimes. ‘Thousands of searchers were conducted’, according to a report from the Commissioners, but only one agency was paying for the app, mostly because the groups who made use of it did so on a free trial.

According to the commissioners’ report, Clearview said that people’s consent wasn’t required to use their facial biometric information, because their information came from photos already on the internet for the world to see. The privacy law has an exception for publicly available information. The commission did not agree.

‘Information collected from public websites, such as social media or professional profiles, and then used for an unrelated purpose, does not fall under the ‘publicly available’ exception’, according to the report. The commissioners objected to the images being used in a way that the posters of the photos hadn’t intended and in a way that could ‘create the risk of significant harm to those individuals’.

The commissioners noted that they lacked the power to make orders or fine companies. So, they sent a ‘letter of intention to Clearview AI telling them to halt the offering its facial recognition services in Canada, halt the scraping of Canadians’ faces, and to delete images already collected.

That order is almost impossible— figuring out the nationality or residence of a person from just their face.

Hoan Ton-That, the Chief Executive of Clearview AI said on Wednesday that as a result of the inquiry, the company had stopped operations in Canada last year July, but the company didn’t have plans to delete Canadians from its database.

Previously, the company has had to delete faces after going on the wrong side of local privacy laws. In 2020, Clearview was sued in Illinois for violating the Biometric Information Privacy Act of the state, which provides that companies must get the consent of people before using images of their faces. Clearview attempted to delete Illinois residents’ faces by, for example, looking at photo metadata and geographical information. It also let state residents request removal by uploading photos of themselves through an ‘opt-out form’.

Mr Ton-That said Clearview allows Canadians to opt out of the database in the same way.

Mr Therrien wasn’t pleased with that solution. ‘You realize the irony of the remedy, requiring individuals to provide further personal information about themselves’, he said.

Mr Ton-That said that he was anticipating the fight in court. ‘This is a simple issue of public information and who has access to it and why’, he said. ‘We don’t want a world where it’s just Google and a few other tech companies accessing public information’.