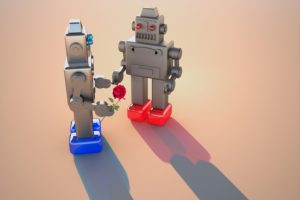 The selection of mates among humanity is so fundamental to its survival, and yet, so mysterious. It has been the subject of intense psychological studies and research for decades, resulting in varying theories about why we choose the person we choose.

‘Mate choice is really complicated, especially in humans’, said Dan Conroy-Beam, Assistant Professor in the Department of Psychological & Brain Sciences at UC Santa Barbara, and author of a paper in the journal ‘Personality and Social Psychology Review’. ‘And there have been a lot of people who have proposed abstract ideas about how it might happen’.

One theory posits that we evaluate potential mates against an internal standard of preferred qualities—‘a minimum bar’—, that have to be met before being considered as a potential partner.

‘And we learn where that minimum bar is based on how other people treat us’, he said. Another model describes the dating scene as a European social dance of the 18th century.

‘One side approaches the other side and they get these kinds of temporary relationships going’, said Conroy-Beam. ‘And basically, you stay in a relationship until you get a better offer and everybody kind of recurrently ditches their partners for better ones’.

However, these mate selection models and similar ones to them do not capture the complete picture of picking a mate in real life, noted Conroy-Beam.

‘When you have a system that is particularly complicated like human mating markets are, verbal models are sometimes not such a great way to understand what’s going on’, he said. He explained that competing desires and social dynamics play a large role in mate selection, and added that the numerous levels of complexities cannot be accurately captured or quantified.

Thus, the next best thing that can hold human-like multiple levels of detail and complexity is a computer simulation. Taking steps to better understand mate choice, Conroy-Beam developed a new approach called ‘couple simulation’ which test-drives mate selection models against the qualities and priorities of a sample of real-life couples.

‘The real advantage that we have here is that we’re going away from just these verbal models and into explicit computational models’, he said. ‘We’re directly simulating people’s real choices; we’re removing the limits of doing this in our own heads because we have computers that can keep track of all the very complicated interactions that are going on.’

The process is initiated by measuring the qualities and preferences of a few hundred couples— actual people who have made real-life mate choices. That data is subsequently crunched unto simulated copies of each person called ‘avatar agents’ which possess the same attributes and desires as their human counterparts. The exception is that in the simulated world, these people are single.

‘We break them up and throw all these little agents into the market’, said Conroy-Beam. ‘Then we run various algorithms and see which ones do the best job at putting them back together with the agent representing their real-world partner’.

The algorithms represent different models of mate selection, which make the rules that governs the interaction of the agents, based on the model’s predictions. In addition to the Aspiration Threshold Model (minimum bar) and the Gale-Shapley Algorithm (optimizing stable pairs), the team also made use of the Kalick-Hamilton Model (KHM), which has the assumption that people choose mates based on their attractiveness, and a new model proposed by Conroy-Beam called the Resource Allocation Model (RAM).

‘It’s thinking about mate choice in terms of investment of limited resource’, he said. ‘So you’ve only got so much time and so much money and so much energy that you can dedicate to potential partners. And so your question as the person who’s looking for a partner is “who deserves most of these limited resources?”’.

Conroy-Beam’s model turned out to be the most accurate of the models, correctly matching about 45% of the couples in the simulated market in the first runs of couple simulation. Why does the Resource Allocation Model work so well?

‘There are a number of differences between RAM and other models’, he said. ‘The other models tear attraction like an on/off switch, but RAM allows for gradients of attraction. It also incorporates reciprocity; the more a potential mate pursues you, the more you pursue them in return’, he said. The Gale-Shapley algorithm came in next, followed by the Aspirational Threshold Model and then the KHM (attractiveness). Random pairings came in last.

It is still too early to tell how accurate couple simulation may be. 45% correct is still 55% wrong, said Conroy-Beam. However, for a first run, 45% is remarkable. According to the study, the people also report to having a higher quality and more enjoyable relationship (more love, less jealousy, more commitment, more satisfaction), than the people in the inaccurately paired couples.

Conroy-Beam and his team at the Computational Mate Choice Lab at UCSB will continue to improve their models which he refers to as ‘really rough sketches’ to increase its accuracy. They have the aim of conducting a longer term longitudinal study soon to observe if accurately predicted couples differ in longevity.

‘We hope to do this across cultures as well as to incorporate same-sex couples in the near future’, he said. ‘We also have plans in the next couple of years to try to apply this to single people to prospectively predict their future relationships’.

This research was supported by the National Science Foundation’s Early Career Award 1845586.