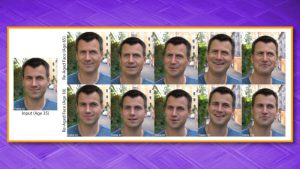 Gizmodo reported that Disney researchers recently designed a novel neural network which is capable of altering the visual age of actors in film or TV. This technology will allow movie producers make actors appear younger or older making use of an automated process that is relatively affordable and less time time-consuming than previous methods.

Customarily, when a film special effects team needs to make an actor look younger or older (a technique popularly called re-aging), they use a 3D scanning and modeling process or a 2D frame-by-frame digital retouching of the face of the actor using tools similar to those in Photoshop. Depending on the length and extent of the work, it can take weeks, months, or even longer.

For the design of FRAN, Disney researchers conducted a random generation of thousands of examples of synthetically-aged faces between ages 18 and 85, making use of StyleGAN2. Studying that training data, FRAN learned general principles about how age changes a person’s appearance. Those aging principles can now be applied to a real actor in motion, frame by frame.

‘Our network is trained in a supervised fashion on a large number of face image pairs showing the same synthetic and photorealistic person, labeled with the corresponding source and target ages,’ the researchers wrote in an academic paper. By the synthetic generation of training data, they bypassed the ‘seemingly impossible task’ of collecting images depicting ‘a variety of identities, ages, and ethnicities in different viewpoints.’

Disney refers to the result as a ‘production-ready solution’— meaning that the output is of enough high quality to be used in a movie or TV show. It is quite possibly the first AI solution of that form which can alter the age of an actor on video despite viewpoints, lighting conditions, and variable expressions. The researchers also created a user-friendly interface for FRAN allowing artists to use the tool easily in a production environment.

The research for FRAN was presented by Disney in a paper titled ‘Production-Ready Face Re-Aging for Visual Effects,’ and was submitted at the 2022 ACM SIGGRAPH Asia conference in December.

Taking note of Disney’s history in inserting computer-generated actors in Star Wars movies and shows, we may now begin to see technology similar to FRAN in future Disney productions.

← New Website Allows Users Search Through Files from the ’80s, ’90s and 2000s
Researchers Are Teaching AI to Play Minecraft →