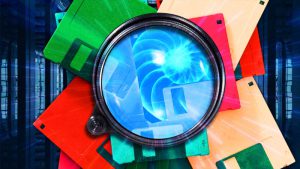 Discmaster allows a glimpse into digital media culture and its evolution. This cultural history is often faced with obscurities regarding incompatibilities in file formats.

Discmaster files are gotten from the Internet Archive, which have been uploaded by thousands of people over the years. The novel site collects all these information and performs a comprehensive search using file size, source, format, type, file date, etc.

Discmaster was created by a team of anonymous programmers who made an offer to Scott to host it for them. Scott stated that the website is ’99.999%’ the work of the anonymous group, including the vintage gray theme it is set in. Although Scott works for the Internet Archive, he stated that Discmaster is ‘100 percent unaffiliated’ with the organization.

An advantage of Discmaster is that it has already carried out most of the file format conversion on the back end, which allows the vintage files to be more accessible. For instance, a user can search for vintage music files like MIDI, and listen to them without any third-party tool.

‘It’s got all the conversion to enable you to preview things immediately. So, there’s no additional external installation. That, to me, is the fundamental power of what we’re dealing with here.’

In the Twitter announcement thread of Discmaster, people are already making use of the service to find their lost programs during the 1990s, as well as other vintage files.

‘It is probably, to me, one of the most important computer history research project opportunities that we’ve had in 10 years,’ said Scott. ‘It’s not done. They’ve analyzed 7,000 and some-odd CD-ROMs. And they’re about to do another 8,000.

Using a wide archival net, everything was captured and made available in its original form. ‘The [resources] they are choosing are very specifically compilation and presentation CD-ROMs, like the best shareware discs,’ Scott said, ‘pulling in the ones that were meant to be encapsulated plastic resources of information.’

← Interpol is Setting Up a Police Team in the Metaverse