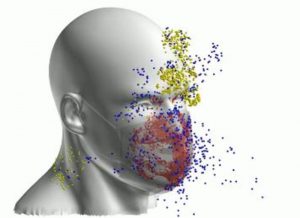 A Japanese study that modeled the dispersal of droplets on a supercomputer recently found that wearing two masks doesn’t do much in preventing the spread of droplets that be carrying the coronavirus, when compared to one well-fitted disposable mask.

In February, the U.S. Centers for Disease Control and Prevention recommended double masking, saying that Americans should endeavor to wear a cloth mask over a disposable mask, the latest addition to its statements on face coverings.

The simulation found that wearing one tightly-fitted disposable mask prevented the spread of 85% of droplets possibly carrying the virus, while wearing two masks increased it to 89%. A regularly fitted mask catches 81% of the droplets, while one loosely-fitted mask catches 69%.

The study also noted that a tight fit and lack of gaps in the mask is necessary to preventing the spread of droplets. The CDC guidance noted that the goal was to have the second mask push the edges of the inner mask to make it more snug. The study said wearing two nonwoven masks was not recommended.

Previously, the supercomputer has been used to illustrate the types of masks that are most effective, and model the merits of ventilation in preventing the spread of the virus.