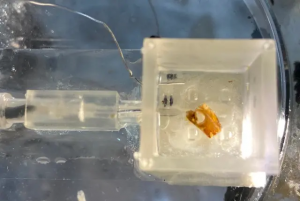 In a never-seen-before technological development, researchers from Tel Aviv University (TAU) have succeeded in connecting the ear of a dead locust to a robot that receives electrical signals from it and gives it an appropriate response.

An excerpt from the study reveals that when the researchers clap once, the locust ear takes cognizance of the sound and the robot moves forward; when they clap twice, the robot moves backward.

The objective of the study was to analyze how advantages in biological systems may be integrated into technology.

‘We chose the sense of hearing, because it can be easily compared to existing technologies, in contrast to the sense of smell, for example, where the challenge is much greater’, says Dr. Ben M. Maoz of TAU’s lby and Aladar Fleischman Faculty of Engineering and the Sagol School of Neuroscience. They supervised the study with Prof. Yossi Yovel and Prof. Amir Ayali, both experts from Sagol and the School of Zoology.

‘Our task was to replace the robot’s electronic microphone with a dead insect’s ear, use the ear’s ability to detect the electrical signals from the environment— in this case vibrations in the air— and, using a special chip, convert the insect input to that of the robot’, Maoz said.

Maoz emphasized the potential impact of the study on the energy industry, stating that ‘it should be understood that biological systems expend negligible energy compared to electronic systems. They are miniature, and therefore also extremely economical and efficient.’

‘In general, biological systems have a huge advantage over technological systems— both in terms of sensitivity and in terms of energy consumption’, he said. ‘This initiative opens the door to sensory integrations between robots and insects— and may make much more cumbersome and expensive developments in the field of robotics redundant.’

He also explained more of the details of future sensory directions the research could take, including sight and smell. Some animals have been known to see spectrums of light which the naked human eye cannot see. Other can sniff out drugs, specific diseases, bombs and even earthquakes.

He concluded that ‘the sky is the limit.’