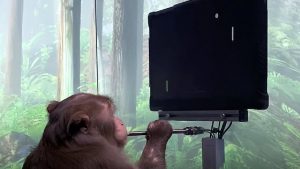 Neuralink, a company owned by Elon Musk which focuses on mind control recently released a blog post video with details of an invention which uses its hardware making it possible for a monkey to play Pong with only its brain.

In the video, Neuralink illustrated how its sensor hardware and brain implant was used to record a baseline of activity from this monkey (referred to as ‘Pager’) as it played a game where it had to move a token to different squares using a joystick with its hand.

Making use of that baseline data, Neuralink used machine learning to predict accurately where Pager would move the physical controller before the move was made. The researchers then got rid of the paddle, and did the same thing with Pong, resulting in Pager no longer moving its hand on the air on the nonexistent paddle, but instead, was controlling the in-game action entirely with its mind through the Link hardware and embedded neural threads.

The last news we heard of Neuralink, Musk was demonstrating the Link tech in August 2020, making use of pigs to illustrate how it could read signals from the brain depending on different stimuli.

This update with Pager shows that Neuralink tech is headed in the direction of human applications, since according to the blog post by the company, the technology could be used to assist patients with paralysis operate a cursor on a computer, for example. It could also be applied to other paradigms including touch controls on an iPhone and even typing on a virtual keyboard.