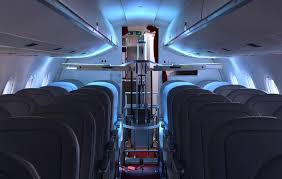 A robot armed with ultraviolet light to kill viruses is now being tested on Swiss airplanes— the general idea being to restore passenger confidence and reduce the strain of the pandemic on the travel industry.

UVeya, a Swiss start-up has been conducting the trials of the robots with Dubai-based airport services company Dnata in Embraer jets from Helvetic Airways, a charter airline owned by Martin Ebner, Swiss billionaire.

Aircraft makers have to certify the devices and are researching the effects the UV light may have on the interior upholstery, which could fade after many disinfections, according to UVeya co-founder Jodoc Elmiger.

Still, he has hope that the robot cleaners could reduce people’s fear of flying in this COVID-19 pandemic.

‘This is a proven technology. It’s been used for over 50 years in hospitals and laboratories. It’s very efficient’, Elmiger said. ‘It doesn’t leave any trace or residue.’

So far, Elmiger’s team has built three prototypes, one of which he demonstrated inside a Helvetic jet at the Zurich Airport where traffic went down 75% last year.

The robot’s lights, mounted on a crucifix-shaped frame, casts a soft-blue glow as it moved up the Embraer’s aisle. One robot can disinfect a single-aisled plane in 13 minutes, from bottom to top, though longer planes may take more time.

Dnata executives are hopeful that airplane makers will sign off on the robots. It is estimated that they will be sold for 15,000 Swiss francs ($15,930), as governments adopt new measures to prevent air travelers from getting sick.

‘We were looking for a sustainable, and also environmentally friendly solution, to cope with those requests’, said Lukas Gyger, Dnata’s Chief Operating Officer in Switzerland.

Although privately owned Helvetic is not in need of bailouts as the rest of the industry, its business has also been badly affected, with its fleet sitting idly in hangars. UVeya’s UV robots could help change that, said Mehdi Guenin, Helvetic spokesman.

‘If our passengers, if our crew know our aircraft are safe— that there are no viruses or bacteria— it could help them to fly again’, said Guenin.

← Elon Musk’s Neuralink Device Equips Monkey to Play Pong With Only Its Brain
People are More Likely to Rely on Computers Than Other People, According to New Research →