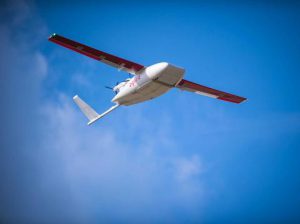 Zipline, a San Francisco startup has been delivering shots of the coronavirus vaccine in Ghana. This delivery is part of WHO’s first shipment of vaccines through COVAX, a program with the objective of providing developing countries with adequate doses for at least 20% of their population.

Ghana became the first country to launch the program to deliver the shots with drones. Zipline has been in the business of delivering medical supplies since 2016, making use of patented and autonomous drones.

Zipline’s app can be used by doctors to place orders for such supplies and track the shipments.

Zipline has partnerships with Walmart and Novant Health in the US, as well as national operations in Rwanda and Ghana. Its PPE deliveries became the first long-range drone logistics flights to be approved by the FAA.

Zipline began the drone deliveries on Tuesday in Ghana as it dispersed 4,500 doses across the Ashanti Region in south of the country, in 36 different journeys in a partnership with the Ghanaian government and UPS.

According to GAVI, about 2.5 million doses will be delivered using the drones.

‘Not only does this make Ghana the world’s first country to deploy drones on a national scale for the delivery of COVID-19 vaccines, but it is also a giant effort in ensuring equitable access and enabling Ghana to fully utilize its healthcare infrastructure to deliver vaccines’, said Zipline CEO Keller Rinaudo.

600,000 doses of the vaccine were shipped by COVAX to the capital, Accra in late February. These vaccines were created by the University of Oxford and AstraZeneca.

However, the distribution of these vaccine doses globally is proving to be a herculean task.

Even though the vaccines eventually get to the developing countries, the appropriate transport system and road networks may not be available for the doses to be distributed to everyone in need.

This issue is further complicated by its requirements for storage. Pfizer’s vaccine has to be conveyed at -94 degrees Fahrenheit through a system of deep-freeze airport warehouses and then refrigerated in vehicles using dry ice and GPS temperature-monitoring devices. AstraZeneca’s and Moderna’s can be transported at fridge temperatures.

The flight of each drone is fully automated and supervised from its distribution center. They are able to fly close to 100 miles round-trip on a single battery charge, move at a speed of 80mph, and transport four pounds of cargo.

Orders can be booked in advance or placed on demand for just in-time delivery. The drones can be launched within seven minutes of the receipt of the order.

Unlike the traditional drones, Zipline’s drones bear a resemblance to small planes. They are six feet long with an 11-foot wingspan. Rather than landing, the boxes of supplies are dropped with a parachute attached to soften their fall.