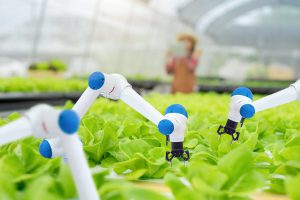 According to Forrester, over a third of European job roles could be rendered redundant by automation over the next two decades as companies battle against unproductivity and a thinning workforce.

In their latest Future of Jobs Forecast, the tech analysts predicted that over 12 million jobs could be lost across Europe to automation, mostly affecting workers in industries like food services, retail and hospitality.

Approximately 49 million jobs in the ‘Big European 5’ (The UK, Spain, Italy, Germany and France) could be automated. This puts in jeopardy work such as zero-hour contracts and part-time jobs where the workers don’t have much bargaining power.

There is a growing pressure prompting businesses to increase their investments in automation, especially in countries where agriculture, industry and construction are big money-makers.

Although SMEs with up to 50 workers make up about two-thirds of European employment, their productivity lags behind those of bigger corporations. In manufacturing, microenterprises are 40% less productive than bigger companies.

A study of robot adoption over the course of five years at French manufacturing firms revealed that robots lowered production overheads by reducing labour costs by 4%-6%.

Business owners view automation technology as a way of reducing the gaps steadily being created by an ageing population, described by Forrester as a ‘demographic time bomb’. The analyst predicted that in the next 28 years, Europe will have 30 million less people of working age than in 2020.

As a result of the large rate of productivity lost to the pandemic, organizations are now looking to machines to recover their losses and efficiency. Industries already using automation have now invested more money into the technology to reduce the effect of the pandemic.

‘Europeans organizations are also in a particularly strong position to embrace automation because of Europe’s declining working-age population and the high number of routine, low-skilled jobs that can be easily automated.’

According to Forrester, nine million new jobs are predicted to be created in Europe by 2040 in emerging sectors like green energy and smart cities. This means that only about 3 million jobs will ‘actually’ be lost to automation, the qualifier being that people who lose their jobs may not be able to find new ones.

Business owners and leaders outside Europe are also researching automation’s role in filling the shortages of skill and speeding up production.

‘They imagine future computer capabilities without understanding enterprise technology adoption constraint and the cultural barriers within an organization that resist change.’

← Driver on Autopilot in Fatal Crash is charged with a Felony
IRS to use Facial Recognition for Website, Causes Uproar in Congress →