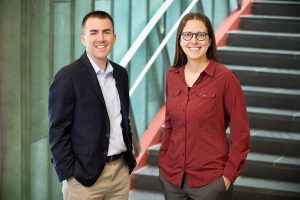 From left: Paul Bruno – professor of education policy, organization, and leadership in the College of Education; and Colleen Lewis, professor of computer science

However, an effect of the greater enrollment in computing courses may be less participation in humanities courses, as found by the researchers at the University of Illinois Urbana-Champaign.

Using data obtained from the California Department of Education in 2003-2019, the researchers studied the effects on student test scores and the implications of greater student enrollment in computing courses. The study was published in the Educational Administration Quarterly journal.

The data showed that the percentage of students in California high schools that offered at least one computer science course went from 45% in 2003 to 79% in 2019.

‘As someone who works in school administration, it raises a lot of questions about how schools— especially high schools— are going to implement this rapid change and offer these new courses effectively,’ said Paul Bruno, Professor of education policy, organization and leadership. ‘Schools are already having trouble offering all the courses that they need for students to graduate and go on to college— and finding enough qualified instructors to teach them, especially in science, technology, engineering and math subjects.’

The researchers found no significant improvement in the school test scores, despite the school systems promoting computing courses that supposedly improve student achievement in math and reading.

However, the researchers said that test scores are not all that matters.

‘We’re not able to see why or how schools or students are making these kinds of choices, but we think that’s an important consideration,’ Bruno said. ‘If we want students to take more computer science, what are we comfortable with there being less of in the curriculum?’

According to Bruno, some school districts allow computer science courses to count toward graduation requirements in math and foreign languages, while other schools haven’t decided on how to incorporate them.

Bruno said it is important to be aware of the demands on schools’ and students’ resources and time to ensure that the courses are offered in ways to benefit every party involved.

‘That means thinking carefully about who we have to teach these courses and how we adjust the curricula to make room for them. All of these things are important in thinking about what the actual costs and benefits of computer science education are,’ said Bruno.

As school districts across the country struggle with teacher shortages, flexible authorization requirements allows the California schools staff their computer science courses with faculty members with credentials and experience in math, science or vocational education.

Bruno and Lewis found a significant gender and racial gap between computer science students and teachers. Hispanic, Black and Native American teens were less likely to enroll schools with computer science courses than their white or Asian peers. And even when they did, they were underrepresented in computer science enrollments. The researchers believe this is influenced by the scarcity of computer science teachers who are women, or of racial and ethnic minorities.

‘Effective and equitable computer science implementation requires more than enrolling ever-growing numbers of students in ever-growing numbers of courses,’ Lewis said. ‘Going forward, it will be increasingly important to develop better measures of computer science teacher quality that can be used to assess both the average strength of these teachers and the prevalence of gaps in teaching quality between differing groups of students.’