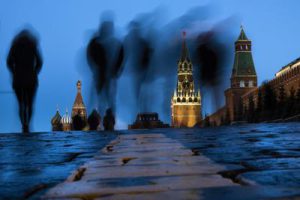 A large amount of tech workers in Russia are leaving to look for safer and greener pastures. Over 70,000 tech specialists incited by the change of political atmosphere, left the country after its invasion of Ukraine, with many more expected to follow.

Russia’s loss is however some other country’s gain. These countries would see experience and fresh expertise added to their already high-tech industries.

According to the U.N. refugee agency, over 4 million people fled Ukraine and many more have been displaced within the country.

Russian President Vladimir Putin has reacted to the brain drain of tech specialists by approving legislation to remove income taxes between now and 2023 for people who work in IT companies.

Tech workers who left the country say they are in no rush to return. A large amount with European Union visas have settled in Poland, the Baltic nations of Latvia and Lithuania.

A larger number have relocated to countries where Russians do not require visas: Georgia, Armenia and the former Soviet Republics in Central Asia. In times of normalcy, skilled laborers emigrate from these shaky countries to the significantly more successful Russia.

Anastasia, 24, freelance computer system analyst from the Siberian city of Novosibirsk relocated to Kyrgyzstan where her husband has living relatives.

‘When we heard about the war on Feb 24, we thought it was probably time to leave, but that we might wait and see. On February 25, we bought our tickets and left. There wasn’t much thinking to do,’ said Anastasia.

‘As long as I can remember, there has always been fear around expressing one’s own views in Russia,’ she said, adding that the war and ‘the background noise of patriotism’ forbade it even more. ‘I left one day before they began searching and interrogating people at the border.’

The quantum of the brain drain was explained by Sergei Plugotarenko, the head of the Russian Association for Electronic Communications, an industry lobbying group.

What prevented a larger mass exit was the high cost of flights out of the country. Still, Plugotarenko predicted that another 100,000 tech workers may leave the country by April.

Konstantin Siniushin, Managing Partner at Untitled Ventures, a tech-intensive venture capital fund based in Latvia, said that Russian tech firms with international clientele would have to move since numerous foreign companies are taking themselves out from anything Russia-related.

‘They had to leave the country so their business could survive, or, in the case of research and development workers, they were relocated by HQs,’ Siniushin wrote.

According to Siniushin, Untitled Ventures is helping with the emigration, chartering two flights to Armenia with about 300 Russian tech workers in it.

Russian talent is ripe for the poaching now. A 2020 Global Skills Index report published by Coursera, found that Russians scored highest for skill proficiency in technology and data science.

As soon as the war in Ukraine began, the Central Asian nation of Uzbekistan radically made easier the process of acquiring work visas and residence permits for IT specialists.

Anton Filippov, a St. Petersburg mobile app programmer and his team of freelancers moved to Tashkent, the Uzbek capital, where he grew up.

‘On February 24, it was like we had woken up to this different terrible reality. We’re all young, less than 27 years old, and so we were afraid we might be called up to take part in this war,’ said Filippov.

However, young professionals like Filippov do not necessarily plan on staying where they first moved to.

‘If the conditions they find differ from the ones they were promised, they will simply move on,’ he said.

Currently, entire companies are making attempts to relocate to avoid the international sanctions from the war. A senior diplomat from Kazakhstan, a country neighboring Russia appealed for fleeing foreign companies to come to his country.

Kazakhstan is trying to diversify its economy which is highly reliant on oil exports, with its eye on high-tech investors. In 2017, the government set up a tech park in its capital, Nur-Sultan and offered grants, tax freedom and preferential loans to anyone prepared to start shop there.

Kazakhstan’s hope is that the brain drain in Russia will give this initiative a major boost.

‘The accounts of Russian companies are being frozen, and their transactions do not go through. They are trying to keep customers, and one available opportunity is to go to Kazakhstan,’ said Arman Abdrasilov, Chairman of Zerde Holding, an investment fund in Kazakhstan’s business hub, Almaty.

‘Russian companies or startups cannot move to Lithuania,’ said Inga Simanonyte, Adviser to the Baltic nation’s Economy and Innovation Minister. ‘We do not work with any Russian company with their possible relocation to Lithuania, and the ministry has suspended all applications for startup visas since February 24.’

Some governments are wary that Russian spies may engage in cyber-mischief abroad.

‘The IT sector in Russia is very closely connected to the security services. The problem is that without an extremely strong vetting process, we risk importing parts of the criminal system of Russia,’ Lithuanian political analyst Marius Laurinavicius said.

Siniushin is urging Western countries to open their doors for their employers can take advantage of the opportunity the war has created.

‘The more talent that Europe or the United States can take away from Russia today, the more benefits these new innovators, whose potential will be fully realized abroad, will bring to other countries,’ he said.