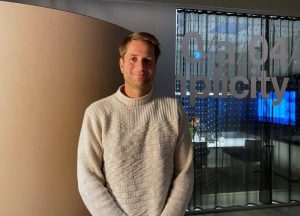 The Swedish welfare state has been credited with backing the success of one of the biggest European fintech company listings staged by Swedish billionaire founder Sebastian Siemiatkowski. The 39-year old referred particularly to a late 1990s government policy to ensure there’s a computer in every home.

‘Computers were inaccessible for low-income families such as mine, but when the reform came into play, my mother bought us a computer the very next day’, he said.

Siemiatkowski began to code when he was 16. Twenty years later, his firm Klarna is valued at $46 billion and has plans of going public early next year, as predicted by some bankers.

Sweden’s emphasis on computer education and investments in internet connectivity explain why its capital Stockholm is riddled with startups and home to such global brands as Skype, Spotify and Klarna, although they have very high tax rates.

The scheme ran for three years from 1998 to 2001. 850,000 home computers were purchased then, reaching about 4 million households which made almost a quarter of the country. These households were not required to pay for the machines and it helped many people who were unable to afford them.

Klarna was founded in 2005. At that time, there were 28 broadband subscriptions per 100 people in Sweden, compared to 17 in the U.S., although dial-up was much more common there. According to data from the World Bank, Sweden had a global average of 3.7.

Spotify as opposed to Apple’s iTunes allowed its users to stream music, instead of only downloading them, which gave Sweden the edge when streaming became widely popular.

‘That could only happen in a country where broadband was the standard much earlier, while in other markets, the connection was too slow’, Siemiatkowski said.

‘That allowed our society to be a couple years ahead’.

Executives and campaigners claims that the European country illustrates that a deep social net as opposed to the entrepreneurial spirit can encourage innovation. Although, it is fair to say that the architects of Sweden’s welfare in the 1950s didn’t envisage this.

Childcare is mostly free. Insurance funds can keep you going if your business fails or you lose your job, ensuring up to 80% of your previous salary for the first 300 days of unemployment.

‘The social safety net we have in Sweden allows us to be less vulnerable to taking risks’, said Gohar Avagyan, co-founder of Vaam, a video messaging service.

Although investments are more in the larger European economies like France and Britain, Sweden more than pulls its own weight.

According to a 2018 study by OECD economists, they have the third highest startup rate in the world just behind Turkey and Spain, with 20 startups per 1000 employees. They also have the highest three year survival rate for startups at 74%.

According to Sarah Guemouri at venture capital firm Atomico, Stockholm is second only to Silicon valley in terms of unicorns— startups valued above $1 billion— per capita, at around 0.8 per 100,00 inhabitants.

Guemouri, co-author of a 2020 report on European tech companies, said Silicon Valley in San Francisco has around 1.4 unicorns per 100,000.

It is unsure whether Sweden’s fast growth will last however, where capital gains are taxed at 30% and income tax may be as high as 60%.

In 2016, Spotify argued that the high taxes made it taxing to attract overseas talent, threatening to move its headquarters out of the country though it hasn’t yet done so.

Yusuf Ozdalga, partner at venture capital firm QED Investors, stated that access to funding and administrative tasks related to founding a company could prove difficult for non-Swedish speakers. He compared it to Amsterdam, capital of the Netherlands, where English was adopted as the official language to make life easier for international companies.

Jeppe Zink, partner at London-based venture capital firm Northzone, stated that a third of the exit value from European fintech companies came from Sweden alone. He added that government policy contributed to this.

‘It’s an interesting dilemma for us venture capitalists as we’re not used to regulation creating markets, in fact we are inherently nervous about regulation.’

The Digital Minister of Sweden, Anders Ygeman said that social regulation could make it ‘possible to fail’ and then ‘be up and running again’ for innovators.

‘You’re really creating ripple effects when you’re seeing the success of somebody else and I think that’s perhaps the most important thing in order to create local ecosystems.’