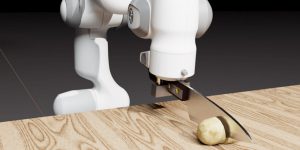 Researchers from the USC’s Department of Computer Science and NVDIA have released a new simulator for robotic cutting which can accurately reproduce the forces acting on a knife while it slices through common food. The system can also simulate cutting through human tissue, which has potential in the medical field. The paper received the Best Student Paper Award at the Robotics: Science and Systems (RSS) Conference 2021 on July 16th.

Previously, researchers had challenges creating intelligent robots which replicate cutting. One of these challenges is that no two objects are the same and the cutting systems struggles with variations. To bypass this, the team created an approach to simulate cutting by introducing springs between the two halves of the object being cut, represented by a mesh. The springs are weakened over time in proportion to the force exerted by the knife on the mesh.

‘What makes ours a special kind of simulator is that it is “differentiable” which means that it can help us automatically tune these simulation parameters from real-world measurements’, said lead author Eric Heiden, Ph.D. computer science student at USC. ‘That’s important because closing this reality gap is a significant challenge for roboticists today. Without this, robots may never break out of simulation into the real world.’

To use the skills in the simulation in the real world, the simulator must be able to model a real system. The researchers used a dataset of force profiles from a physical robot to produce highly precise predictions of how the knife would move in real life. The simulator could also enhance force haptic feedback accuracy in surgical robots, helping guide surgeons and preventing injury.

‘Here, it is important to have an accurate model of the cutting process and to be able to realistically reproduce the forces acting on the cutting tool as different kinds of tissue are being cut’, said Heiden. ‘With our approach, we are able to automatically tune our simulator to match different types of material and achieve highly accurate simulations of the force profile’.

In ongoing research, the team is applying the system to real-world robots.