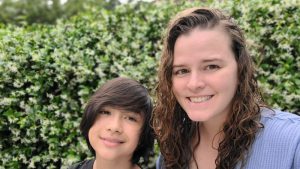 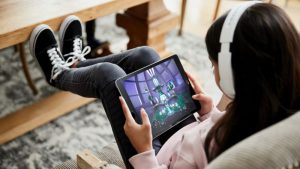 Owain Sihanourath, 13, was diagnosed with Attention Deficit Hyperactivity Disorder (ADHD) in pre-school. Since then, his family, resident in Savannah, Georgia, have taken him to several occupational therapists to help him cope better with daily activities.

They also tested the medication route, but stopped after the drugs aggravated the boy’s migraines and made him sick.

Kelcey, his mother, was ‘hoping for something more, for any other option.’

‘I could see him struggling to understand why he was not able to focus, and the frustration he had when he tried so hard and would still get distracted,’ she said. ‘It broke my heart, but I felt trapped and completely useless.’

Help eventually came in the form of a computer game called EndeavorRx.

In 2020, it was the first game to be approved by the U.S. Food and Drug Administration (FDA) for use in treating children with ADHD.

The EndeavorRx is available only on prescription, and looks similar to regular games. The game consists of controlling an alien in a spaceship that races through different worlds with the goal of collecting items.

The game was developed in collaboration with neuroscientists, and aims to stimulate and enhance areas of the brain in charge of attention function.

The idea is to train a child with ADHD to multitask and ignore distractions better. A computer algorithm measures the child’s performance and customizes the game’s difficulty in real-time.

When the game is prescribed by the doctors, the parents of the child are sent an activation link needed before the game can be played.

Kelcey admitted she was ‘a little skeptical’. At the end of 2020, Owain started a 3 month programme, playing the game for 25 minutes daily. He also did another round in 2021.

‘He admitted it was a little harder than he expected,’ she said. ‘But he understood that he was doing it to help improve his focus. He remained super motivated despite the difficulties and frustrations that came along with it.’

After Owain’s daily session, she took note of his behavior in the app and tracked his progress.

Eventually, she began to notice small positive changes in his behavior. Getting reader for school had become easier, and his teachers sent no negative messages.

Owain had failed the third grade, but his grades had now shot up to A’s and B’s.

‘It has been amazing to see my son so successful, but more so, seeing him have confidence in himself,’ said Kelcey. ‘He is no longer upset and confused about why he just does not get it.’

Eddie Martucci, CEO of Akili, the tech firm that created EndeavorRx, explained that the game was designed to improve cognitive progressing.

‘It is something that’s very difficult to get through molecular means, like taking a pill. But it turns out that sensory stimuli can actually directly stimulate parts of the brain controlling cognitive function.’

He plans to launch the game in Europe in the next few years.

One of the games makes the user try to memorize moving objects, while another is a card game testing the user’s memory.

The patient’s performance in the game, their comments and facial expressions are monitored by the app which accesses the camera and microphone of their computer or mobile phone.

Thymia was launched by Dr. Emilia Molimpakis with a Ph.D. in linguistics, experimental psychology and cognitive neuroscience from University College London, and her co-founder Dr. Stefano Goria.

Dr. Goria said the app ‘gathers and extracts biomarkers that are relevant for understanding depression symptoms… in a useable and engaging way.’

Akili and Molimpakis state that their apps should be used alongside doctor-led treatments, and not as an alternative. Angela Karanja, UK adolescent psychologist, agrees.

‘While these are… effective inventions, they should be used alongside current existing (patient evaluation) questionnaires, which have been tested and accepted for reliability and validity, as well as doctors’ input, and also alongside other treatments, not in isolation,’ said Karanja.

Fellow UK psychologist Lee Chambers said that the use of video games in the treatment of mental health conditions appears to have ‘potential’ although it is still in its early stages.

‘Engaging with a game has the ability to remove aspects of feeling like we are being tested and measured,’ he said. ‘These types of mental health games have an ability to widen access, and track variations in the baseline data that they collect over time.’

‘Given this, it has the potential to be an early indicator and show patterns in a way we don’t currently have access to.’